I am deleting this entry from Book I and will post it here in Book II instead. It seems to me that the subject is a step closer to the core of the theme of vengeance and violence.

People are so concerned with justice and its application -- they are so obsessed with it, they even invented a god that is ALL-JUST. Why? If not to punish -- and get my vengeance in the afterlife -- people that have done me or other people harm. If I am not able to have my revenge in this life, with a god that is all-just, I am assured that those people will get what they deserved in the afterlife. 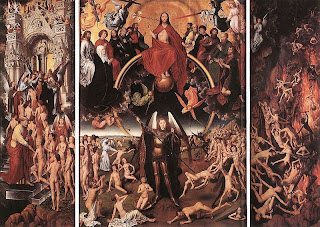 So, they came up with the concept of the final justice, the ultimate justice, or the ultimate application of justice -- "Judgement Day"! Where, on the "end of days", all sinners who will eventually go to eternal hell will be on god's left, and those on the right will go to heaven (I am not so sure who are the people that will stay on god's right since everyone sinned anyway -- based on their own criteria, anyway).

But, can you see the deep rooted mechanism working here? How a whole culture's psyche is so obsessed with vengeance and revenge? So much so, that they would not only pursue perpetrators to the ends of the earth, but also to the ends of life, and even the afterlife!

In Christian eschatology, the Last Judgment, Final Judgment, Judgment Day, or Day of the Lords is the judgment by God of all nations.[1] It will take place after the resurrection of the dead and the Second Coming (Revelation 20:12–15). This belief has inspired numerous artistic depictions.

The concept of a Last Judgement[2] is also found in all Abrahamic religions and elsewhere (for example, see Duat).

There is little agreement among Christian denominations as to what happens after death and before the Last Judgment.

In Islam, the Last Judgment is called a number of things, including yaum al-Qiyamah (literally "the Day of Standing") and God Almighty, or Allah in Arabic, will judge all Creation. --http://en.wikipedia.org/wiki/Last_Judgement